Zadie Smith is kind of everything you ever want to be. I’m in love with this short story I heard her read on the New Yorker fiction podcast, and she can do no wrong. She’s been a finalist for the 2018 National Book Critics Circle Award in Criticism, a PEN America Book Award finalist, and had a New York Times Notable book. If she told me to jump off a bridge, I would at least think about it.

Here are some of Zadie Smith’s favorite books:

Homesick for Another World by Ottessa Moshfegh

Homesick for Another World is the rare case where an author’s short story collection is if anything more anticipated than her novel.

And for good reason. There’s something eerily unsettling about Ottessa Moshfegh’s stories, something almost dangerous, while also being delightful, and even laugh-out-loud funny. Her characters are all unsteady on their feet in one way or another; they all yearn for connection and betterment, though each in very different ways, but they are often tripped up by their own baser impulses and existential insecurities. Homesick for Another World is a master class in the varieties of self-deception across the gamut of individuals representing the human condition. 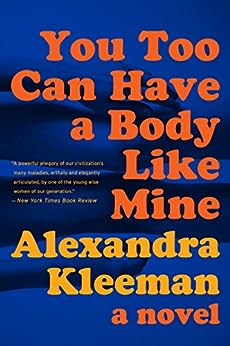 You Too Can Have a Body Like Mine by Alexandra Kleeman

An intelligent and madly entertaining debut novel reminiscent of The Crying of Lot 49, White Noise, and City of Glass that is at once a missing-person mystery, an exorcism of modern culture, and a wholly singular vision of contemporary womanhood from a terrifying and often funny voice of a new generation.

A woman known only by the letter A lives in an unnamed American city with her roommate, B, and boyfriend, C, who wants her to join him on a reality show called That’s My Partner! A eats (or doesn’t) the right things, watches endless amounts of television, often just for the commercials—particularly the recurring cartoon escapades of Kandy Kat, the mascot for an entirely chemical dessert—and models herself on a standard of beauty that only exists in such advertising. She fixates on the fifteen minutes of fame a news-celebrity named Michael has earned after buying up his local Wally Supermarket’s entire, and increasingly ample, supply of veal.

The Arab of the Future by Riad Sattouf

“I tore through two volumes … it’s the most enjoyable graphic novel I’ve read in a while.” — Zadie Smith

The Arab of the Future, the #1 French best-seller, tells the unforgettable story of Riad Sattouf’s childhood, spent in the shadows of 3 dictators—Muammar Gaddafi, Hafez al-Assad, and his father.

In striking, virtuoso graphic style that captures both the immediacy of childhood and the fervor of political idealism, Riad Sattouf recounts his nomadic childhood growing up in rural France, Gaddafi’s Libya, and Assad’s Syria—but always under the roof of his father, a Syrian Pan-Arabist who drags his family along in his pursuit of grandiose dreams for the Arab nation.

Riad, delicate and wide-eyed, follows in the trail of his mismatched parents; his mother, a bookish French student, is as modest as his father is flamboyant. Venturing first to the Great Socialist People’s Libyan Arab State and then joining the family tribe in Homs, Syria, they hold fast to the vision of the paradise that always lies just around the corner. And hold they do, though food is scarce, children kill dogs for sport, and with locks banned, the Sattoufs come home one day to discover another family occupying their apartment. The ultimate outsider, Riad, with his flowing blond hair, is called the ultimate insult… Jewish. And in no time at all, his father has come up with yet another grand plan, moving from building a new people to building his own great palace.

Innocents and Others by Dana Spiotta

“I’ve been meaning to read Dana Spiotta for years, and I’m so glad I finally did: ‘Innocents and Others’ is terrific.” — Zadie Smith

Innocents and Others is about two women who grow up in LA in the 80s and become filmmakers. Meadow and Carrie have everything in common—except their views on sex, power, movie-making, and morality. Their friendship is complicated, but their devotion to each other trumps their wildly different approaches to film and to life. Meadow was always the more idealistic and brainy of the two; Carrie was more pragmatic. Into their lives comes Jelly, a master of seduction who calls powerful men and seduces them not with sex, but by being a superior listener. All of these women grapple with the question of how to be good: a good lover, a good friend, a good mother, a good artist.

Lincoln in the Bardo by George Saunders

“If I have to choose only one , then it’s Lincoln in the Bardo… A masterpiece.” — Zadie Smith

February 1862. The Civil War is less than one year old. The fighting has begun in earnest, and the nation has begun to realize it is in for a long, bloody struggle. Meanwhile, President Lincoln’s beloved eleven-year-old son, Willie, lies upstairs in the White House, gravely ill. In a matter of days, despite predictions of a recovery, Willie dies and is laid to rest in a Georgetown cemetery. “My poor boy, he was too good for this earth,” the president says at the time. “God has called him home.” Newspapers report that a grief-stricken Lincoln returns, alone, to the crypt several times to hold his boy’s body.

From that seed of historical truth, George Saunders spins an unforgettable story of familial love and loss that breaks free of its realistic, historical framework into a supernatural realm both hilarious and terrifying. Willie Lincoln finds himself in a strange purgatory where ghosts mingle, gripe, commiserate, quarrel, and enact bizarre acts of penance. Within this transitional state—called, in the Tibetan tradition, the bardo—a monumental struggle erupts over young Willie’s soul.

Lincoln in the Bardo is an astonishing feat of imagination and a bold step forward from one of the most important and influential writers of his generation. Formally daring, generous in spirit, deeply concerned with matters of the heart, it is a testament to fiction’s ability to speak honestly and powerfully to the things that really matter to us. Saunders has invented a thrilling new form that deploys a kaleidoscopic, theatrical panorama of voices to ask a timeless, profound question: How do we live and love when we know that everything we love must end?

“I remember it as the book that made me want to write.” — Zadie Smith

A lively illustrated masterpiece, this is the gripping story of a natural disaster and the 13-year-old Kingston boy who lives to tell the tale. While holed up in their home, Joe Brown, his sister Mary, and their parents wait for the eye of the hurricane to pass over their home. Outside, a terrifying wind turns trees to splinters, darkness swallows the land, and torrential rains lash the roof. Celebrating Jamaica’s resilience in the face of natural disasters, this account follows the family as they huddle, worry, wait, and hope—together.

“It’s a nonfiction book about combating depression by way of a daily micro-dose of LSD, and it’s Ayelet, so you can imagine.” — Zadie Smith

When a small vial arrives in her mailbox from “Lewis Carroll,” Ayelet Waldman is at a low point. Her moods have become intolerably severe; she has tried nearly every medication possible; her husband and children are suffering with her. So she opens the vial, places two drops on her tongue, and joins the ranks of an underground but increasingly vocal group of scientists and civilians successfully using therapeutic microdoses of LSD. As Waldman charts her experience over the course of a month–bursts of productivity, sleepless nights, a newfound sense of equanimity–she also explores the history and mythology of LSD, the cutting-edge research into the drug, and the byzantine policies that control it. Drawing on her experience as a federal public defender, and as the mother of teenagers, and her research into the therapeutic value of psychedelics, Waldman has produced a book that is eye-opening, often hilarious, and utterly enthralling.

“When I was a student I was assigned Mythologies and A Lover’s Discourse, by Roland Barthes, and felt at once that something momentous had happened to me, that I had met a writer who had changed my course in life somehow; and looking back now, I think he did.” — Zadie Smith

“No denunciation without its proper instrument of close analysis,” Roland Barthes wrote in his preface to Mythologies. There is no more proper instrument of analysis of our contemporary myths than this book—one of the most significant works in French theory, and one that has transformed the way readers and philosophers view the world around them.

Our age is a triumph of codification. We own devices that bring the world to the command of our fingertips. We have access to boundless information and prodigious quantities of stuff. We decide to like or not, to believe or not, to buy or not. We pick and choose. We think we are free. Yet all around us, in pop culture, politics, mainstream media, and advertising, there are codes and symbols that govern our choices. They are the fabrications of consumer society. They express myths of success, well-being, or happiness. As Barthes sees it, these myths must be carefully deciphered, and debunked.